For this update things have a decidedly French tone.
And a Napoleonic one at that. I have three Napoleonic commissions going but the first two are both French.

First up are some AB miniatures. They are marked as 15mm although they do seem a bit big compared to other makers.
They are very well sculpted and they paint up well enough. You had better have an eye for detail, however, as the AB figures are very detailed indeed.

The figures showing are from a Legere battalion. Above is an artillery limber team. I have many more units to paint for this commission. 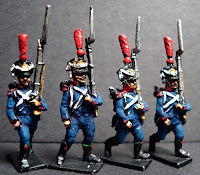 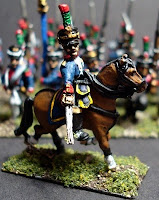 The next French commission was a unit of Middle Guard. I"m not sure of the maker of the figures but they are very well done. Again, these are 15mm and a very nice unit to paint.
Which brings me to a comment. I do like the Napoleonic era. The uniforms are colorful and there is no shortage of nationalities to model. But the figures do take longer to paint and to research. There is also the pressure to "get it right" as there are a great deal of uniform experts who will tell you that "the third regiment of foot traded in their white pom poms for chartreuse ones during the great Slobenia revolt, March of 1809. Of course they quickly switched to lavender when the regiment lost it's eagle, April 15, 1810. " I do the best I can but there comes a time in research when enough is enough and I have to put the paint to the metal. So if you ever decide to retain me for a Napoleonic commission be sure to provide some uniform details. Otherwise you will just have to trust me that I get the uniform right.
Until next time....
Posted by Ken at 12:23 PM