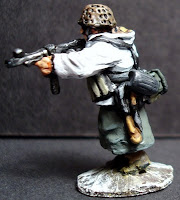 For this update I am doing a bit of advertising. The pictures in this post are miniatures produced by a company called Sgt. Majors Miniatures.

At the Huzzah convention I had the pleasure of meeting a gentleman named Andy Turlington. He has recently acquired the Sgt. Majors Miniatures line

and is now importing
Mutineer Miniatures from Scotland. Andy was kind enough to send me a few samples to paint.


The miniatures you see are 20mm World War Two. One figure is a late war German in winter gear. He is wearing a regulation greatcoat with a winter parka over that. The other figure is a US infantryman in a greatcoat as well. I took the liberty of painting him up as a paratrooper. You can barely make out the 101st Screaming Eagle patch on his right shoulder. Both figures paint up well.

Andy will be expanding the line but current offerings include winter Germans, winter US army, Japanese, early war US army, US Marines, and oth 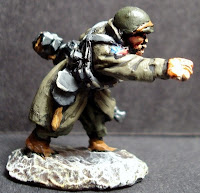 er US pacific war figures. If you game 20mm WW2 I highly recommend Sgt. Majors Miniatures. Here are a few more views....
You can find out more about Sgt. Majors at..
www.sgmm.biz/
Thank you for looking! 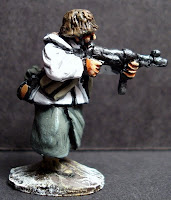