lost scrolls give away at Ferrous Lands

A quick post to let everyone know that over at the blog, Ferrous Lands, they are having a give away of the new Field of Glory supplement, Lost Scrolls. A very kind and generous offer. Of course, I have posted a comment to enter and I encourage everyone who has an interest in this game to enter as well. Good Luck!!
www.ferrouslands.com/2010/01/lost-scrolls-giveaway.html

Ah, the ancient Egyptians. They were the super power of their day. These miniatures are actually the second part of a commission that I've been working on for some time. They are for a client who, over the years, has become a good friend, too. The miniatures are mostly Chariot Miniatures, with a few Essex as well. The pictures only show a small sample of what's been completed.

One thing I like about ancients is the diversity you get with some armies. I, personally, like having an army where I can identify a unit by it's look. I tried to use a few different skin tones to further help identify who is who. Of course, it's a bit easier with the Nubians, pictured above. For skin tones I really like the Reaper Master series of paints. They have great t

riads that cover many skin types. This is the second time I've done African skin tones and the results are so much better with Reaper

. I highly recommend them. 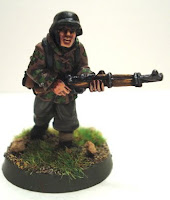 Well, you know how on my previous post I said how the Artizan figures tempted me? Well, here are a few German SS troopers from Artizan. I had picked these up sometime last year on a whim. With painting the US airborne it got me in the mood to paint the Germans. This will eventually be a squad of 10 figures and they will be for sale. Contact me if you're interested. 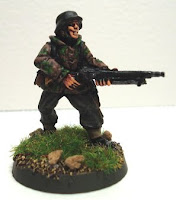 US Paras by Artizan

These are 28mm World War Two figures by Artizan. They are US airborne troops from the 101st airborne division. I have yet to put on the patches and insignia. Normally, I am more of a 15mm guy. But I have to admit, these are nice figures and have tempted me over to the big side. This is part of a larger commission and thus there will be more figures posted on my blog before the commission is complete. I hope you enjoy viewing the figures as much as I am enjoying painting them.
Ken

End of the Year

Yeah, I know. It's been a while since the end of 2009. But I've been behind. I mean, look at the last time I made a post!! Has it really been since November? Well, my excuse is moving, holidays, and illness all in that order. But all of that is behind me so no more excuses.

I thought I would post some year end numbers for Blue Moose Arts. You may find this interesting or maybe just annoying. But I always like little facts like these so I'm going to post them. Last year was the first for Blue Moose Arts. Highlights for the year was my attending Totalcon and Coldwars. Both were great experiences for me. I met some great people and had a lot of fun. Low points included moving (yech!), some family emergencies, and illness.

So what did Blue Moose Arts do in it's inaugural year? Let's break it down by figure size.
For 28mm I painted approximately 75 figures. The majority of them being fantasy figures. As a matter of fact, only 6 of them were historical. I painted another 13 figures somewhere between 20mm and 25mm. Again, fantasy.

For 15mm I painted....a lot! This is by far the most popular size figure that I get requests to paint. As such, I only have estimates of amounts but here goes....I painted about 750 World War Two infantry figures. 500 hundred of those were Germans. I did 122 US and 104 Italians. The remaining were Soviet. Also in the WW2 era was 19 AFV, 10 soft skins, and 15 guns. All of those were German. For the medieval period I painted 19 mounted figures and 15 foot. For the ancient era I painted about 65 mounted figures and 490 foot figures. Oh, and 1 chariot. For nationalities it was quite a mix but probably Roman figures were the majority. New Kingdom Egyptian coming in a close second. For the modern era, I painted 95 infantry figures, 2 seal boats, and 4 Humvee.
Last I have 6mm and 1/25 or 1/300. These are a bit harder to estimate but I painted about 675 figures. Of these only 29 were Napoleonic, the rest being WW2. Also, I painted 16 aircraft in this scale as well as 40 trucks.
Not a bad start for a new painting service. This year I hope to see a big increase in painting. I will be attending Huzzah! in Portland, Maine. Hopefully I will attend some other conventions but for now this is it.
As to what's on the painting board, now... there are 15mm WW2 Germans, 15mm Romans, 15mm Egyptians (ancients), 15mm Phyrric pikes, 28mm WW2 US Airborne, 28mm Fantasy figures, 29mm Gauls, 15mm French Napoleonics, and 15mm Dacians. And these are just commissions. I am painting other things for sale and other things just for me. I also have my hands in many other fires so stay tuned for many great things in 2010.