Minimus was tired. For days he and his small detachment of cavalry had rode ahead of the main Roman army. He longed for battle but at every opportunity the barbarians simply turned tail and ran. Soon his thoughts began to wander in we

ary daydreams. He dreamed of Rome and all of it's pleasures. Wine and the city life. "BARBARIANS!" The cry snapped him back into reality. There, in a clearing was a group of barbarian horsemen. "Troopers deploy" shouted Minimus. Much to his surprise these savages didn't run away but charged head long to battle....

This is a battle report from a game I played against my five year old son. Now, before you deride me for playing against a five year old let me explain a few things. My wife works a lot. And I am the stay at home Dad. Sure, I work a few odd jobs and I run my painting service but a good portion of my time is keeping my son entertained. We play a lot of games like Snakes and Ladders, Sorry, Operation....you get the picture.

In all of these games that I play with my son it turns out he wins most of the time. Sometimes I take it easy on him and sometimes I don't. But he still wins. He is very lucky with the dice and I must admit, he's pretty smart for a five year old too. I recently finished up some cavalry for the Battle of Sabis game that will be run at the Huzzah wargame convention. Go to http://www.huzzahcon.com/ for more information. But I am digressing a bit.

I had this thought that I could run a quick game against my son before mailing the figures to the organizers. I don't normally play with figures that belong to someone else but I thought the group wouldn't mind the figures being used to introduce a young one to wargaming. Yes, I am promoting wargaming to the youth (and getting a bit of revenge for all of my losses in those other games!).

I thought up a quick set of rules he could understand. I gave him a 6 inch ruler and told him each guy could move that far. He got some dice. As he chose the Barbarians to play it was easy. Once figures came into contact his barbarian guys got two attack dice for each figure. A roll of 6 meant they hit their opponent (the very fine Romans played by me). Since the Romans have armor I got two dice to try to save each hit. A roll of six saved. The Romans got only one attack die but the hairy barbarians got only one save die. Each commander (the guys with the swords) got an extra attack die. Pretty simple? Yeah, I think so. Here is how the game went 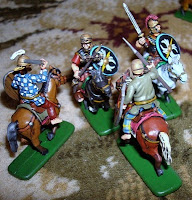 along with a few pictures of the game. ..

Turns 1 through 3 found the two opposing forces deploying. Being the barbarians (and 5 years old) my son just did a headlong charge. I, being the Romans and having the "cough" superior intellect chose to deploy in a much more orderly fashion. Turn 4 found us in contact.

The barbarians started falling first. I killed two in the first contacts. They, in turn, did strike a Roman but his trusty armor saved him. Turn 5 saw the battle become split into four separate combats. On the Roman far left we had 3 Romans troopers facing 2 barbarians. 1 Roman fell but another barbarian did so as well. Next in line were the commanders of both sides. The barbarian commander was hacked down! On the far Roman right we had 4 barbarians vs 2 Romans. 1 Roman died gloriously for Rome.

Turn 6 came and the casualties started to rain upon the battlefield. Unfortunately for me there were more Roman rain drops than barbarian ones. Not to worry, though. On the far left we had wiped out the barbarians while on the far right we were the ones who suffered. I 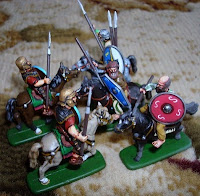 wheeled in my left (including my commander!) and my son turned his forces to meet us.

Turns 7 and 8 found more figures falling. Turn 9 found the Roman commander all alone (eek!) against 2 barbarians. I chose discretion and retreated my commander which caused my son to comment upon my weakness. Rethinking my decision, I turn my commander around for the final battle......


"Horse approaching!" came the cry from the wat 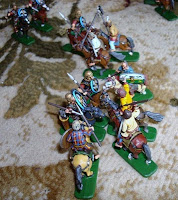 ch commander. Ceasar watched the horse gallop from the woods and approach the camp gates. He could see that there was something tied to the horse but was unable to make out what it was. The gates were opened and the horse allowed to enter. The horse was brought before Ceasar. "My lord, it's Minimus", said one of the officers present. Ceasar gazed upon the dead body of one of his favorite soldiers. Pinned to the body was a crudly written note. "Shall I read it aloud, my lord? questioned a Centurion? 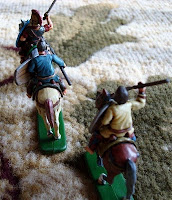 Ceasar sadly nodded his approval. A perplexed look came over the Centurion's face as he tried to make sense of the note. Then he started "I'm a winner, see my prize, you're a loser who sits and cries.... "What could this mean, my lord"


Yes, I LOST! But I hope you enjoy the pictures and a laugh or two. Until next time....