Moving along in the studio

My studio is nothing elaborate.  Just a spare room in my house.  But, from time to time, we change things around in the house.  Invariably, that causes me to make changes in the studio as there is either a complete change in the layout of my space or the extra influx of items causes a reorganization of my space.  As my space is limited, this usually forces me to make decisions on what to keep out and what to pack up and put into storage.  As of this writing I am still trying to clean up the studio from a move of about a month and a half ago.  Ugh.  Of course, when I'm in the studio it's always easier to pick up a paint brush than to clean and organize.

Let's see what sort of work I've done instead of organizing, shall we??? 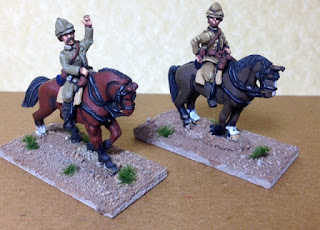 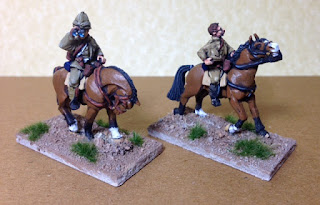 Above are some 25mm Old Glory British commanders for the colonial era. 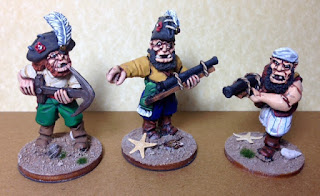 Large scale resin pirate ogres.  This is a special commission and I'll give more details on these later. 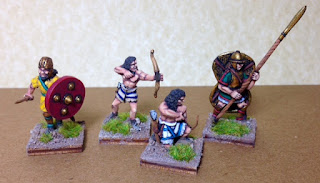 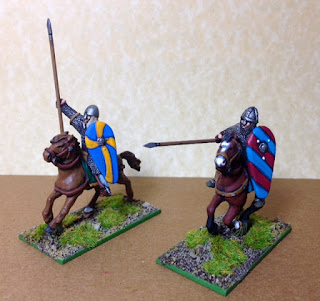 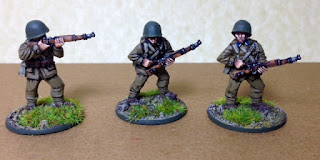 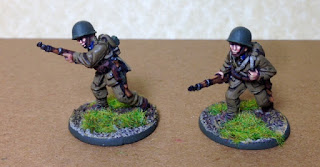 That's it for this week.  Next week shall be more of the same.  But I am working on a special commission that needs to be done in a week's time.  Wish me luck.
Until next time, keep painting....
Posted by Ken at 6:57 AM No comments:

Miniature painting is a bit like meditation for me.  It can be very relaxing and I sometimes find myself doing some odd things that I wouldn't normally do in a public setting.  Singing being one of them.  I usually put on some music to paint to and find myself singing along to a song all the while applying paint to a figure.  My music choices vary.  I'm not sure if it affects my painting.  If it does I apologize for painting country on a death metal, spikey bit figure! 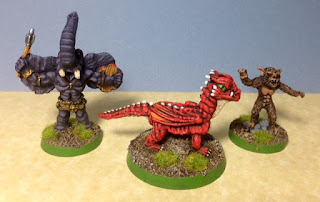 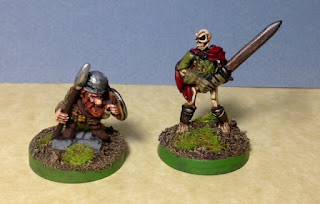 Above you'll find an assortment of fantasy figures.  I couldn't tell you the manufacturer but I can tell you they are 25mm.  These are for a gentleman who was just looking to get a few things painted. 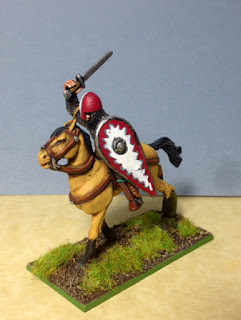 A Gripping Beast 28mm Norman knight.  He will be part of a larger unit for the game SAGA. 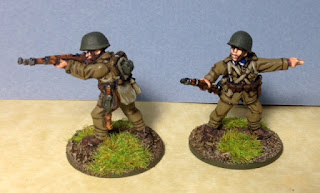 28mm Warlord.  World War Two Poles.  I would be curious to see how these compare to the new Polish range from Crusader.

28mm Wargames Foundry.  World War Two Luftwaffe Pilots/Aircrew.  I quite like these figures.  Perfect for any scenarios where a downed aircraft is in play. 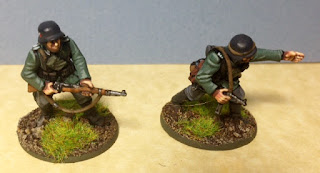 28mm Warlord Early War Germans.  These figures are from the plastic set offered by Warlord.  Plastic figures seem pretty durable.  And they paint up just as easy as metal.  My biggest complaint is the lack of variety offered in box sets.  6 torsos per frame.  One is prone.  Another is in a silly running pose.  One is kneeling.  So that leaves 3 in an upright and sensible pose.  Only so much you can do with those unless you want to start cutting legs to get other positions.  But I am probably being too picky.  I'm sure Warlord sells plenty of sets and others make them work just fine. 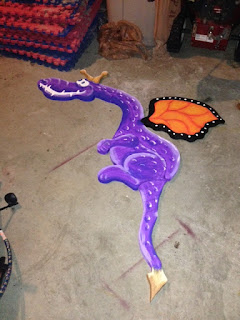 Lastly, something different.  I painted up this dragon to use at our local school.  It is made out of rigid foam.  The same stuff we gamers use for scenery.  I thought it came out pretty cool so I'm including it.  Until next time, keep painting!
Posted by Ken at 7:26 AM No comments: 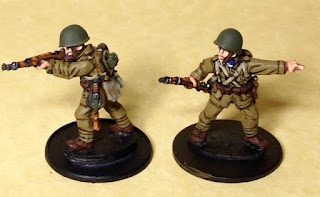 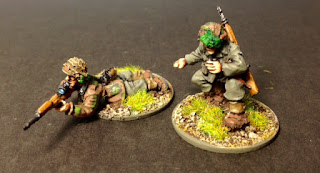 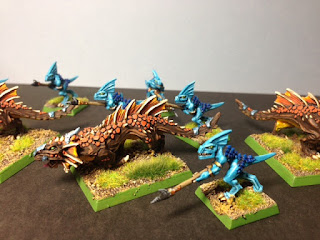 Well, that's all for this week.  I hope to have more completed next week and get pictures posted then.
Until next time.....Keep painting!
Posted by Ken at 12:58 PM No comments:

It's been a long time since I've been active on this blog.  But I will attempt to revive it.  While I will still put posts on commissions that I am working on I will also start including posts regarding my limited gaming.  I say limited because I really don't game all that much although I am starting to find the time more and more, lately.  The next big gaming event for me will be Huzzah held in Portland, Maine.  WWW. Huzzahcon.com if anyone is interested.  I will be running a Jousting tournament and co-running an Impetus tournament.  Additionally I will be helping out some friends with their games. 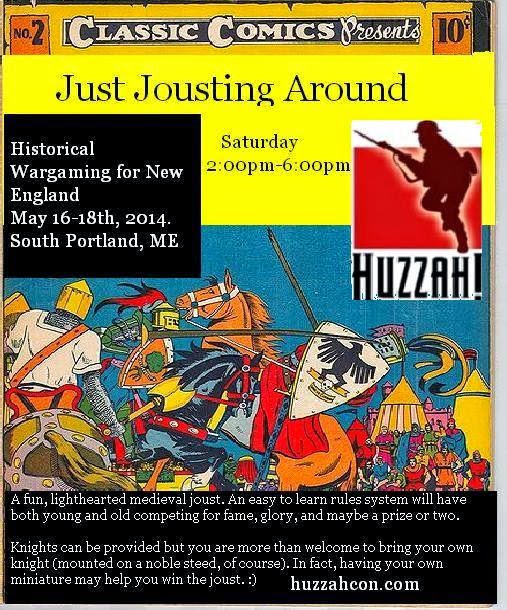 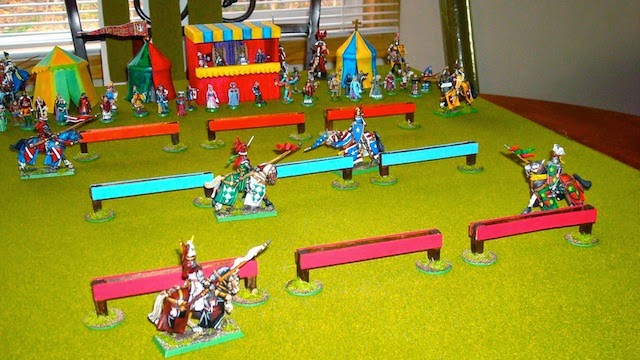 Hopefully, if you're available May 16th through the 18th and in the Portland area you'll stop in and take a look. 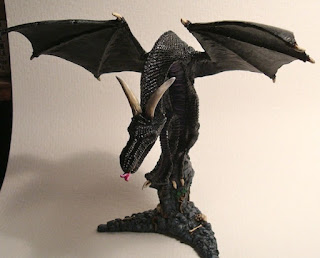 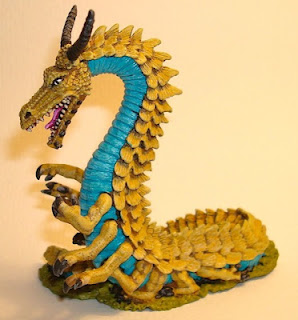 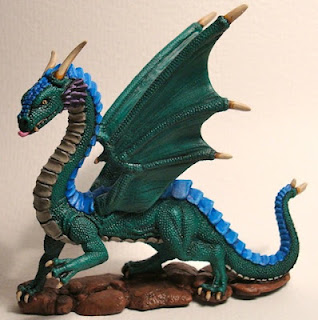 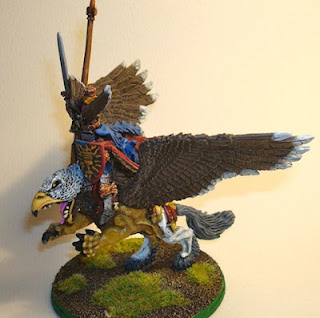 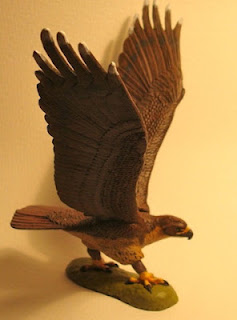 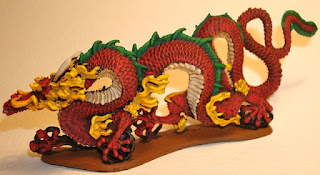 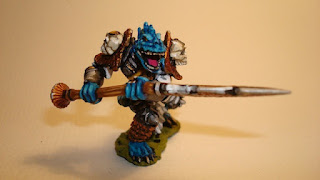 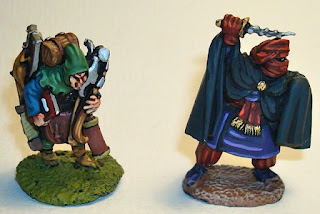 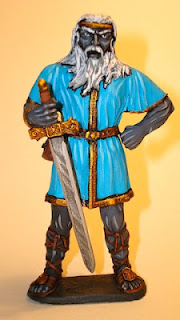